Afterword Essay for 75th anniversary issue of Chicago Review
Abasement, in Territory
Fish, Pole: On Thinking What to Do, in Grand
The Year in Letters, in Tin House
Differences from Yesterday, a Day Like Today, in Essay Daily 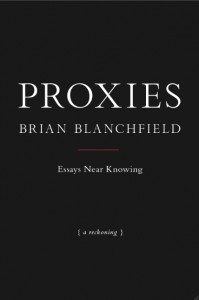 Correction. a rolling endnote. (published as an Essay Press e-chapbook, 2016)
a bibliography of sorts, in Bookmarked, at University of Arizona Poetry Center
and, a playlist/score for Proxies at Largehearted Boy.

with Jamie Quatro, for Oxford American
with Ryan Krull, for The Rumpus
with Jill Talbot, for Essay Daily
with Emily Alexander, for Puerto del Sol
with Andy Fitch, for LA Review of Books
with Danniel Schoonebeek, for the PEN Poetry Series
with Margaree Little, for Warren Wilson College
with Keene Short, for Write in Idaho
with Christopher Nelson, for Green Linden Press
with Turner Canty, in Omniverse
with Janice Lee, National Poetry Month profile, in Entropy
with Merrill Gilfillan, “Purposeful Looking and Songs on the Air,” in Chicago Review (excerpt here)
with Maggie Nelson, “Importunate to Meretricious, Much Love,” in Evening Will Come
with Ben Rutherfurd, in Tremolo
with Eileen Myles, “Poet Walking Through,” in Or

“The dead dancer’s DDI: Hervé Guibert, remedy, contaminant, and getting it down,” Textual Practice, July 2021
“Young Gay and Adrift in the 1970s: A Review of Chris Rush’s The Light Years,” in The New York Times Book Review, July 7, 2019
“Two Mississippi: A Review of Kiese Laymon’s Heavy,” in Bookforum, December 2018
“Trans and Transient: Andrea Lawlor’s Modern Picaresque,” in Bookforum, February 2018.
“Coming Up with Guy Davenport,” in The Oxford American, Spring 2017.
“Freely Espousing: or Subject, to the Avant-Garde” in The Force of What’s Possible, ed. Hoang & Wilkinson, (Nightboat Books, December 2014)
“On ‘The City State’,” in The Poetry Society of America’s “In Their Own Words” series, September 2014
in Hyperallergic, review of The Earth Avails by Mark Wunderlich, July 2014
in Spork, “The History of The History of Ideas, 1973-2012,” January 2014
in Bookforum, review of Hart Crane: After his Lights by Brian Reed, 2009